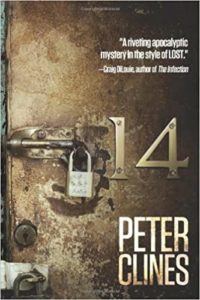 Welcome to my writer’s book club! This month I read Peter Clines’ sci-fi horror novel 14 about a young man who rents a cheap apartment in a very strange and mysterious Hollywood building. I picked the book up while vacationing in L.A. a few years ago and am glad I did.

What I liked about 14

I liked the premise of tenants unravelling the mysteries of their apartment building. Green, seven-legged cockroaches? Electricity but no wires hooking the building up to the grid? Every apartment has its own unique layout and dimensions? Residents sleep soundly but don’t dream? What’s going on?

More importantly, I liked the characters. The protagonist, Nate, is in a dead-end job and is running out of money quickly. At a party, another guest tells him about an apartment in Hollywood that’s dirt cheap. Nate rents the apartment and is happy there despite the weird cockroaches and black light in his kitchen.

Nate is down-to-earth, flawed, and immediately likeable as are Veek, the computer geek, Xela, the artist who likes to sunbathe nude on the roof, Tim, the retiree with a mysterious, possibly military past, and others. The characters are realistic and well-drawn. The villains are more stereotypical and, at times, outlandish, but I didn’t mind that.

Issues I had with 14

I thoroughly enjoyed the mystery behind this strange apartment building, but once the mystery was solved, about halfway through the book, I didn’t like the book as much. Without giving too much away, the building is very fantastical. The characters were believable as they dealt with this new fantastic reality, I just missed the relative innocence of a simply quirky apartment building.

Also, at times, the dialogue was elementary and overstated but this flaw, like the outlandish villains, didn’t make me want to stop reading.

I read the book and then was excited to discover the audiobook version is narrated by Ray Porter who narrates Project Hail Mary. Because of Mr. Porter’s incredible acting, I’ve listened to the audiobook, twice. Each time, I appreciated the book more. The audiobook was chosen by Audible.com as the best sci-fi novel of 2012. 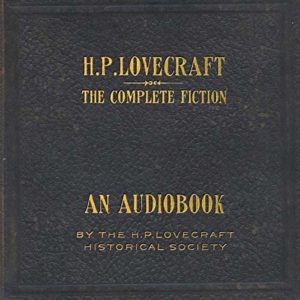 Additionally, in 14, American author H.P. Lovecraft plays a role. Lovecraft wrote science fiction, fantasy, and horror in the early 1900s. Stephen King read Lovecraft as a kid and was highly influenced by him.

I’d heard about Lovecraft often, but had never read any of his books or short stories, so now, because of 14, I’m listening to The Complete Fiction of H.P. Lovecraft.

When I read and listened to 14, I paid close attention to each character and considered how Peter Clines made them unique, flawed, and memorable with their own struggles, needs, and desires. My guess is Clines started with a cliched version of the character as an inspiration and paired it down, adding nuances. I’ll try that with my own characters. 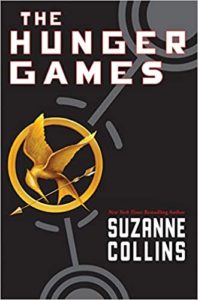 Next month I’ll review a little-known young adult dystopian book called The Hunger Games by Suzanne Collins. In Collins’ novel, two teenagers are selected from each region to compete to the death in the Hunger Games.

From the inciting incident to the crisis at the end, this book is so well-crafted I could offer a whole course on it.

What’s happening in July and August:

I’ve finished the first draft of The Renegade – the Fourth Book in The Devil Particle Series (see my “First Draft Finished” newsletter and am working on the second draft.

I’ve asked my editor, Tim Storm, for an extension to go through the manuscript a third time before sending it to him. He graciously agreed. I hope to get that third draft to him by mid-August.

I’m also getting up earlier these days so I can finally tackle Tim Grahl’s Book Launch Course. My goal is to do an hour’s worth of marketing each day.