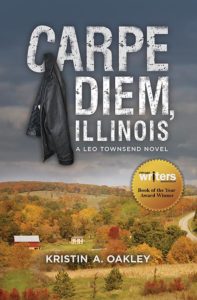 Carpe Diem, Illinois, is the winner of The Chicago Writers Association 2014 Book of the Year Award for non-traditionally published fiction, a finalist in the Independent Author Network 2015 Book of the Year, and a runner-up in the 2016 Shelf Unbound Competition for Best Indie Book.

Order your copy today through Amazon, Little Creek Press, or at Mystery to Me Bookstore in Madison, WI.

At the corner of Tiger Whip Road and Highway 20, Patrick Holden slumped over the handle bars of his idling Harley. The motorcycle’s black leather seat and saddle bags were creased with age, the twenty-year-old fenders dusty but barely scarred. Patrick hadn’t aged as well as his bike. Years of fighting school administrators, education tsars, and a weird mix of politicians had creased more than his outward appearance; it had creased his soul.

The motorcycle’s headlight illuminated the decaying facade of an abandoned shed. Swirling farm dust mixed with dry hay made Patrick cough, leaving a gritty taste in his mouth. He ran his gloved fingers over the neat stitches holding the cycle’s seat together and regretted the late night meeting.

He had been persuasive, articulate, and even-tempered but the meeting had been a disaster. Illinois State Senator Christopher Shaw, in all his patronizing benevolence, had refused to see the obvious dangers of his legislation. Instead, threatened by reason, the senator stormed out of his office. When the door slammed, Patrick realized he was no longer sitting. His skinny, six-foot frame leaned over the senator’s wooden desk, his hands splayed on the maple, leaving damp prints. Jessica, Kristin, and Caitlin in the Badlands of South Dakota