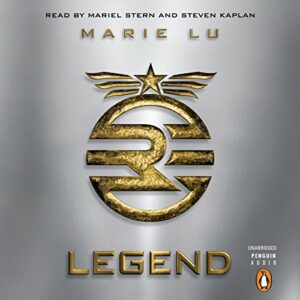 For this month’s Writer’s Book Club, I promised to review Cloud Cuckoo Land by Anthony Doerr. But, I haven’t finished it — it’s 622 pages long and I’m a slow reader.

However, while on my walks I did finish listening to the audiobook version of the 2011 young adult dystopian book Legend by Marie Lu. So, here’s my review of that book instead.

Legend is the story of two fifteen-year-olds: June, a military prodigy, and Day, a notorious criminal. June suspects Day of murdering her brother and hunts him down. The book is set in a futuristic LA in the western section of the United States known as the Republic.

When Republic children turn ten, they have to take a test (the Trial) to determine their place in society. With top marks, they’ll go to a University. If they fail, their parents are forced to sign custody of them over to the Republic and they are (supposedly) sent to labor camps.

June received a score of 1500 and is the only person to have received this highest possible score. Day failed.

I did I mention there’s also a plague?

What I liked about Legend

Though not as well-developed as I’d like, Day and June are interesting characters. They both have high moral standards and are loyal, uncommonly intelligent, and physically agile. They both rebel against society — Day in large ways through his criminal actions, June in smaller ways. For instance, we meet June after she’s violated university rules by leaving campus to scale a skyscraper.

June’s superior fighting skills gets her out of trouble, while Day’s incredible street smarts make him a legend. I particularly liked the scene where they meet. Additionally, there are a couple of  excellent twists and the book’s pacing is very quick.

I listened to the audiobook version read by Mariel Stern and Steven Kaplan. I preferred Kaplan’s voice and acting and am considering hiring him to narrate my Devil Particle Series.

The dialogue is often unnatural and, many times, is used to give the reader information rather than create conflict for the characters. Periodically, the story is over explained which doesn’t let the reader come to their own conclusions. Other than a few great twists, much of the plot is predictable and cliched — rich, law-abiding girl falls in love with poor, sympathetic criminal. And I didn’t feel the romantic connection between Day and June.

I wanted more depth to the characters, particularly Day and June. I also wished Lu had included a scene where Day and June take their trials. Everything in the story and the characters’ lives hinges on how well they do during that test. I wanted to experience that incredible stress along with the characters.

As I edit The Devil Particle Series, I’ll make sure my dialogue isn’t an information dump and that I don’t unnecessarily explain things. I’ll work on trusting the reader to understand the story. Some people may argue that because this book is for a younger audience (11 years old and up) more explanation is needed, but I think we can give kids more credit than that.

Legend is the first book in a series and has been made into a graphic novel (how cool is that?). It’s also being adapted into a television show (they’re changing the characters’ ages from 15 to 18). Once it’s aired, I’ll definitely tune in.

I give Legend  👍🏻 👍🏻 👍🏻 for fast pacing and some excellent plot twists. 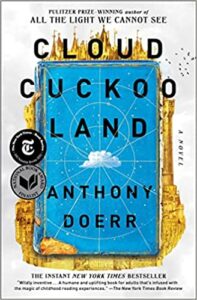 Cloud Cuckoo Land by Anthony Doerr (I promise). After reading just a few pages of this book, I knew I was in for an interesting ride. It’s very different from Doerr’s award-winning novel All the Light We Cannot See, but the writing is just as poetic.

I’m finishing my edits of The Devil Particle (only 30ish pages to go) and will send them to Judi Weiss of Reedsy for copyediting. I can’t tell you how much I love this book. And, I can’t wait for you read it!

If you’re interested in reading a copy of the book before it’s released, be sure to read my next newsletter for more information.

Laurie Scheer and I co-wrote an article for the Chicago Writers Association titled “You Have an Idea for a Novel — What Next?” The article is based upon an online course we’re teaching on Saturday, February 11th from 10:00 a.m. until 12:00 noon. Register now and learn more about other courses for 2023.

You can also now register for the Just Write! An Uncommon Writers Conference in Chicago March 25-26, 2023.

In addition to workshops (including my workshop on characters) and panel discussions on all aspects of writing, agents and publishers will be there to hear your pitch. Hope to see you then!