Virtual Conferencing or Where is Everyone? 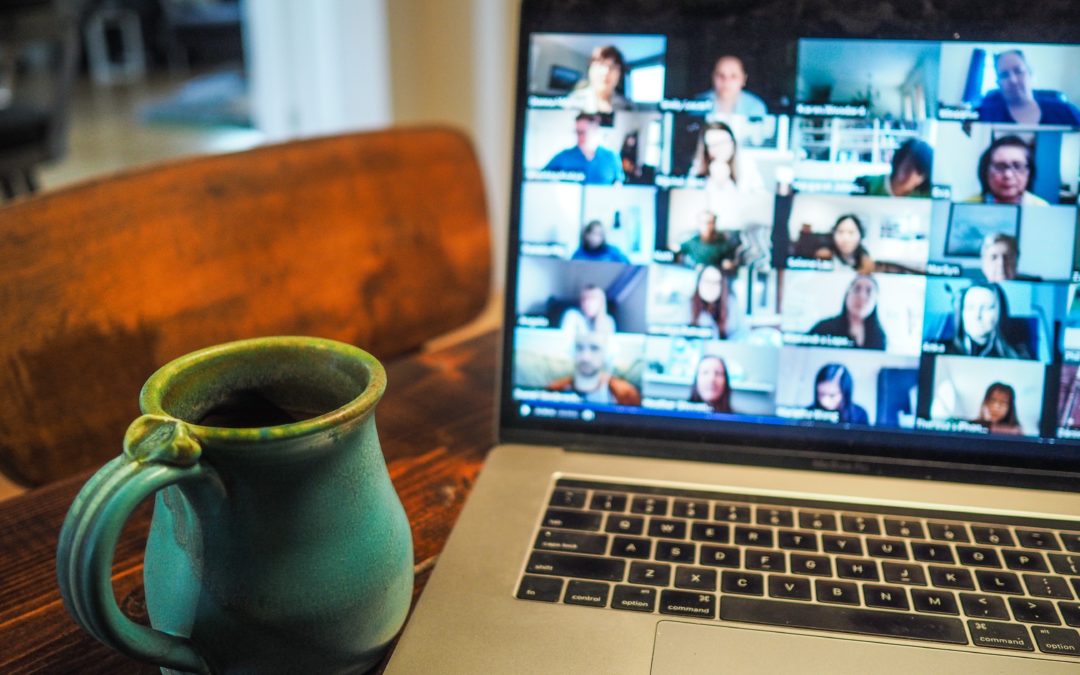 Last weekend, I attended the Writer’s Digest Annual and Novel Writing Conferences from the comfort of my home in Madison, Wisconsin. I like my place, but I would have preferred meeting agents, editors, and other writers in New York City at in-person events. Yet, 2020 being what it is, attending virtual conferences was the next best thing. Or was it?

During the conferences, I presented my workshop “The Formula for Setting that Agents, Editors, and Readers Love.” I also pitched my manuscript The Devil Particle to agents and attended workshops. In order to do this virtually, I attended two one-hour and one half-hour online training sessions on the Intrado program. 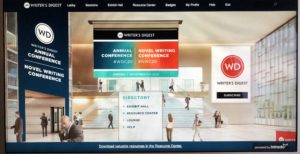 My technology skills are adequate when writing newsletters, but not so great with online presentations. When I give a talk in person, I provide handouts–I don’t have a clue how to create PowerPoint presentations. Thankfully, the Intrado trainers were patient and knowledgeable and once I figured out the logistics, I found the program to be pretty cool. 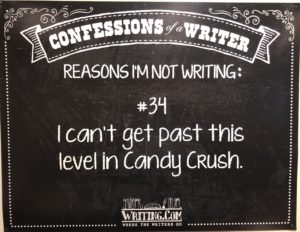 I cleaned up my office for a more professional look (I took down my Candy Crush poster and the photograph of Sam Heughan) and positioned my computer on a cardboard box so the camera looked me in the eye rather than up my nose. I tried on six different sweaters after being told to avoid stripes (I love stripes) and selected polka dots. Then I practiced talking to the little black circle at the top of my computer.

Friday morning at 8:30, I called the Intrado technician and he set me up. The attendees would be muted and would communicate with me only by typing in questions or comments. They would see my face, but I wouldn’t see them. 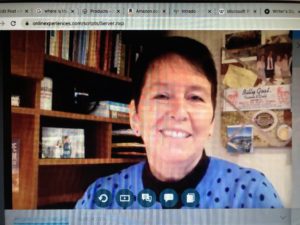 At 9:00, my session started. I was surprised by how hard it was to present without an in-person audience. I didn’t know whether people were engaged or had fallen asleep, were laughing at my jokes or had just left the session. Several people typed in questions, so at least I knew they were listening.

After my presentation, I felt deflated. Usually, people will approach me after my talk and ask questions or want some advice. There’s an energy in the room and a wonderful feeling of camaraderie. When I finished this virtual talk, I was alone in my empty office. It was a huge letdown.

Pitching virtually was an interesting experience. We were assigned an Author’s Booth on Intrado. In the booth, we added a headshot, a short bio, a 60-to-90 second video pitch, and one document (I included The Devil Particle synopsis).

I’d guessed the majority of writers who were pitching would record themselves in front of their bookshelves or in their writer’s offices. Now that my office was cleaned up, I considered doing the same. But I was pitching a young adult dystopian, and I thought why not have a dystopian backdrop? And wouldn’t you know it, there’s a dystopian scene right across the street from my condo. 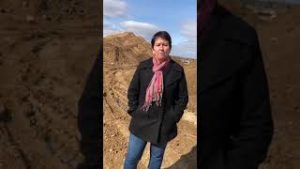 Well, not really. They’re building more condominiums and apartment buildings, but to do so they’ve cleared the woods and the farmer’s field, left muddy pits and two-story mounds of dirt, and constructed strange concrete structures. Perfect. That’s where my daughter and I filmed my pitch video.

I loaded my headshot, bio, video, and synopsis into my Author’s Booth. From 10:15 to 11:15 Saturday morning, seven agents entered my booth and contacted me through the messaging service. Five of them requested pages! I sent them what they requested, have heard back from one (she’s not interested), and am waiting to hear from the other four. I’ll keep you posted! 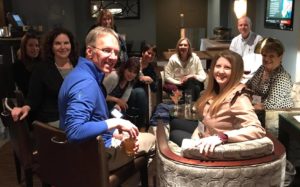 Overall, the virtual conferencing went well, but I still prefer the excitement and buzz of an in-person conference, discussing plotlines and characters over drinks at the bar, cheering on friends during Live Lit events, and discovering that literary agents are, in fact, real people. Hopefully, 2021 will open up. And then oh what a party we’ll have!

Where I’ll be after the holidays:

March 20-21, 2021 – the Chicago Writers Association’s Let’s Just Write! An Uncommon Writers Conference. I’m teaching “The Benefits of Critiquing” workshop and curating the “Let’s Just Read” Live Lit Event. I have every confidence that this will be an in-person event. Join me!

What I’m listening to: 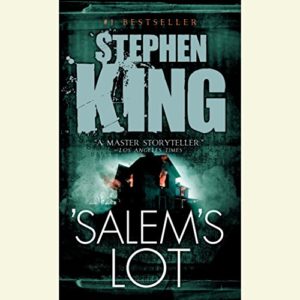 Stephen King’s Salem’s Lot. It’s the first time I’ve listened to, or even read, this book. King gets a little carried away with too much description at times, but I am enjoying it. The book was written in 1975 and everyone smokes. It also took me a while to realize the “girl” they were referring to was in fact a woman in her early twenties. How the times have changed.