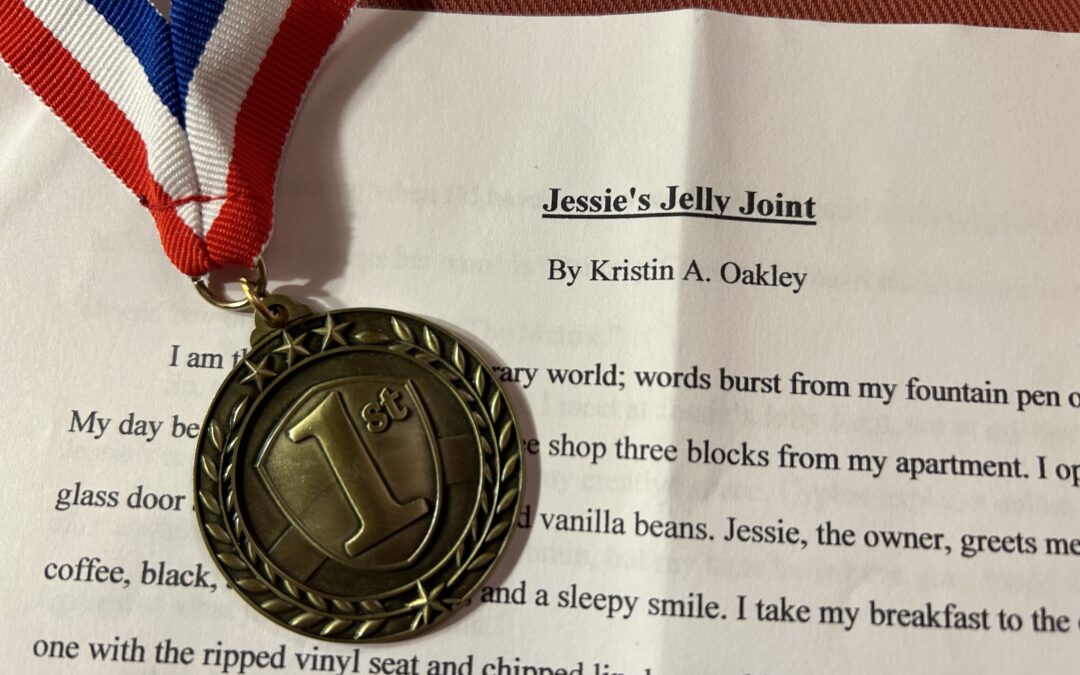 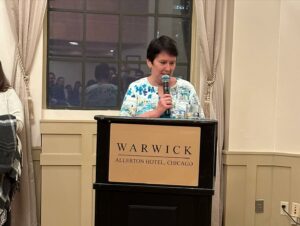 I wrote “Jessie’s Jelly Joint” about nine years ago for an In Print competition where it won third place. For the CWA contest, entries were limited to 750 words or less, so I cut half of the original story.

It was one of seven stories that were selected and each of us read them. Luckily, my whimsical story is fun to read and the crowd was terrific. 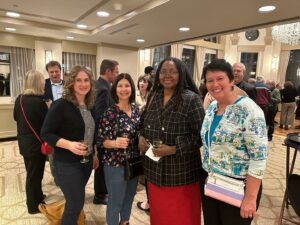 The CWA party was held in the beautiful Tip Top Tavern on the 23rd floor of the Warwick Allerton Hotel on MIchigan Avenue in Chicago.

I met many people, including Alex Cabal, my new boss at Scribophile (more on that later), and saw friends I hadn’t seen in years. I talked with award-winning novelists, playwrights, and poets and several writers who were new to the craft. 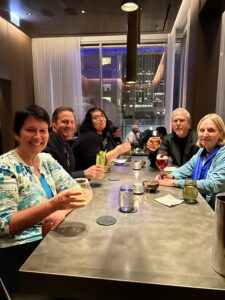 After the party, I went out with CWA board members Randy Richardson, Christina Rodriguez, Dan Burns, and Sandy Colbert for drinks and lots of laughs at Z Bar in The Peninsula Chicago hotel.

It was an incredible night.

So, for your reading pleasure, the award-winning . . .

I am the Mozart of the literary world; words burst from my fountain pen onto the page. My day begins at four a.m. in a coffee shop three blocks from my apartment. I open the diner’s glass door and smell fresh bakery and vanilla beans. Jessie, the owner, greets me with a cup of coffee, black, a grape jelly donut, and a sleepy smile. I take my breakfast to the corner booth, the one with the ripped vinyl seat and chipped linoleum tabletop, and get to work.

Thirty years of breakfasts, lunches, and even dinners at Jessie’s Jelly Joint produced my Pulitzer Prize winning plays: “Juice It Up,” “Love Muffins,” and “Sunnyside or Over Easy” and my twenty-six award-winning novels including my favorite, “Hothouse Hotcakes and the Happy Housewife.”

I’ve had dinners with Hollywood producers interested in making “Geez This Coffee is Hot” into an action flick and flights to a London publisher to discuss my latest series, “Zombies Prefer Waffles.”

Lately my agent, a kid too young to remember when “joint” meant a place and not something you roll, has been telling me about “social media.” At first I laughed. Writers aren’t social. We’re observers, isolationists. On those rare occasions when I have time to socialize, I don’t need the media’s help. There’s plenty of action right outside Jessie’s door.

“That’s not what I mean by ‘social media’,” Agent Smith says. His name is Ryan Smithson, but I prefer my nickname. He was only eight when “The Matrix” was released and isn’t a Sci Fi fan so doesn’t understand the reference which is probably a good thing. Agent Smith explains that absurd sounding things like “Facebook” (now there’s a strange image), “Twitter,” and “LinkedIn” are marketing tools.

I’m wondering when I’d have time to write when Agent Smith suggests I hire a publicist he knows. When he says her name is “Brittany Cypher” I almost choke on my donut. I really should buy that boy a copy of “The Matrix.”

So, Cypher, Agent Smith, and I meet at Jessie’s Jelly Joint, not in my booth, but at a table Jessie’s set aside for us. I never share my creative space. Cypher explains online marketing and after a while I wonder if not only my brain, but my taste buds have gone numb because I can’t figure out what jelly’s in my donut.

“Which computer are you getting?” Cypher asks.

“Why on Earth would I need a computer?”

My jaw drops. A bit of donut plops out, bouncing, then rolling onto Cypher’s spreadsheet.

“It’s easier to submit to publishers,” Cypher continues, ignoring the purplish-red smear on her letterhead, “and you won’t need to hire any more transcribers.”

Typists have a hard time reading my scribblings. The last one titled my short story, “The Biscuit and Butter Bandit.” That’s ridiculous; everyone knows biscuits are better with gravy.

“You’ll be amazed at how fast you can write,” Agent Smith says.

Did he forget I am the Mozart of writing? Speed was never my problem.

“You don’t understand,” I reply. “Putting ink to paper is part of the creative process.”

Agent Smith hands me a computer.

Months later I haven’t left my apartment. I’m addicted to my computer because, well, I’m a whiz at social media–who knew? Not Cypher, poor kid, she’s out of a job.

This morning, I’m sipping stale coffee, updating my Facebook status, and writing a review for a friend’s book when I realize I’ve stopped being a writer. Oh, there are cute anecdotes about my grandkids on my blog, some writing tips on my website, and a casserole recipe I emailed to relatives, but I haven’t had an original story idea since that last cup of fresh coffee at Jessie’s.

Agent Smith’s frustrated. His emails are increasingly, what I would call, “abrupt.” He’s even taken to using all caps and exclamation points.

I think I haven’t written because I don’t have a romance with my computer. That may sound odd, but if you’ve ever held a beautiful fountain pen in your hand and felt the smooth flow of ink turn a blank page into another world, then you know exactly what I mean.

I shove the laptop in a bottom drawer, collect my legal pad and fountain pen, and leave the apartment.

Herald, the doorman, tells me he’s glad to see me and asks if I’m heading to Jessie’s.