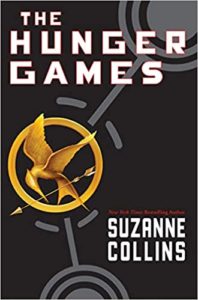 Welcome to my Writer’s Book Club. This month I review a little-known young adult dystopian book called The Hunger Games by Suzanne Collins.

In Collins’ novel, one boy and one girl are selected from each region to compete to the death in the Hunger Games. Only one will survive and be crowned victor.

What I liked about The Hunger Games

From the inciting incident to the crisis at the end, this book is so well-crafted I could offer a whole course on it. I won’t do that here, but I will share my insights as to why this book is so good.

Whether you’re a veteran author, a novice writer, or a passionate reader, you may or may not know that every well-crafted book has the same basic Three-act Structure. Here’s an overview of the First Act using The Hunger Games to illustrate:

Introduction to the world and trouble

In the beginning of a novel, the author introduces the reader to the fictional world and its troubles.

In the beginning of The Hunger Games, sixteen-year-old Katniss Everdeen lives in the poverty-stricken section of District 12. Her father has been killed in a mining accident and her mother is depressed and despondent. It’s up to Katniss to provide food and shelter for her mother and younger sister Primrose.

The hook draws the reader in.

The Hunger Games starts on the day of the annual reaping when one boy and one girl (ages 12-18) from each district will be selected by lottery to compete to the death in the Hunger Games. Primrose is twelve. This is her first reaping.

The inciting incident puts the story in motion, forcing the protagonist to act or decide not to act.

Primrose’s name is selected for the Hunger Games (you probably guessed this). This inciting incident sets up the first major dilemma for Katniss. If Katniss does nothing, Primrose will have to compete and will probably die. If Katniss volunteers to take Primrose’s place, she will probably die and then no one will be able to take care of her family.

The protagonist makes a decision she can’t rescind. Her decision propels her into the story.

Suzanne Collins includes almost all of this in chapter one. She saves Katniss’ decision for chapter two.

I won’t say too much more about the book because I don’t want to spoil it for the three of you who haven’t read it (and why haven’t you, particularly if you’re a writer?). But I do want to mention that Collins puts Katniss through a perfect dilemma at the end of the book. Katniss has to make a chose and her two options are horrific. Collins expertly writes Katniss into an impossible situation.

I had very few issues with The Hunger Games. As is the case of many young adult novels, there is a love triangle, but I think it’s well-played. The two sequels emphasize the love triangle more and I think in those books it’s overdone.

There are times when the violence is very graphic. But that’s typical of dystopian novels, even those catering to people ages 12-18. 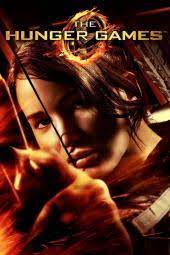 I looked forward to watching the movies when they came out and, with a few exceptions, I wasn’t disappointed. They follow the books very well and Jennifer Lawrence makes a terrific Katniss. Throw in Josh Hutcherson, Liam Hemsworth, Woody Harrelson, Elizabeth Banks, Stanley Tucci, and Lenny Kravitz and you can’t go wrong.

I try to emulate the perfect structure of this book in my manuscripts and refer to it often particularly when writing first drafts. Next month I’ll review a non-fiction book called Humankind: A Hopeful History by Rutger Bregman. This book has changed my views on many things so much so that I’m using its philosophy in The Devil Particle Series.

If you’re at all depressed by the state of affairs in the world today, Humankind will give you hope.

I’m sending the third draft of The Renegade – the Fourth Book in The Devil Particle Series to my editor Tim Storm in the next few days. Then I’m revising the first book in the series for a what I hope is a final draft.

On August 24th, I’m attending the launch party of Larry F. Somers’ debut novel, Price of Passage: A Tale of Immigration and Liberation at Mystery to Me Bookstore in Madison. Congratulations Larry!