Welcome to my Writer’s Book Club! Once a month, I’ll review a book and discuss how the book has influenced my writing. This month I’ve selected Station Eleven, a National Book Award Finalist, by Emily St. John Mandel which has also been made into an HBO Max miniseries.

Station Eleven is set in two different time periods–right before a flu pandemic wipes out 99% of the population and 15-20 years later. This novel is beautifully and intricately written. It’s become one of my favorite books. 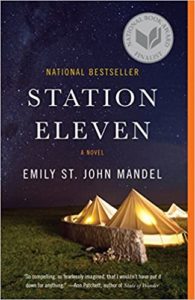 The novel begins with famous actor Arthur Leander performing as King Lear in an innovative production which includes child actors who portray his daughters. In act 3, scene 4, the “mad scene,” Arthur suffers a fatal heartache. The novel follows one of the child actors he befriended (Kirsten), Jeevan (a paparazzo turned paramedic who tries to save Arthur), Arthur’s three ex-wives, and his best friend as they struggle to survive in a world without technology and devoid of law and order.

What I liked about Station Eleven:

The characters are well-drawn, flawed, and realistic. The author handled transitioning from the past to the present extremely well. And the writing is beautiful but not overly flowery.

For instance, this is how Station Eleven begins:

“The king stood in a pool of blue light, unmoored. This was act 4 of King Lear, a winter night at the Elgin Theatre in Toronto. Earlier in the evening, three little gils had played a clapping game onstage as the audience entered, childhood versions of Lear’s daughters, and now they’d returned as hallucinations in the mad scene. The king stumbled and reached for them as they flitted here and there in the shadows. His name was Arthur Leander. He was fifty-one years old and there were flowers in his hair.”

Station Eleven also validates what I, and other artists, do. Kirsten, the child actor who is now in her twenties, performs with a traveling symphony throughout this ravaged country. At first, the Symphony seems futile and perhaps pointless. After all, even twenty years after the pandemic, people are struggling to survive.

But Kirsten has a tattoo that’s also the motto of the Symphony: “Survival Is Not Enough.” This phrase, taken from “Star Trek: the Next Generation,” eloquently and concisely explains the Symphony’s existence. Food, water, and shelter are necessary for survival, but what’s the point of surviving without art?

The one issue I had with Station Eleven:

Some of the characters are named after the instruments they play in the Symphony rather than having proper names. I wondered why. I didn’t mind minor characters being called by their instruments, it showed that Kirsten didn’t have a strong connection to them. But, one of these characters, the clarinet, played an important role in the book. It didn’t make sense to me she wouldn’t have a proper name.

I enjoyed Station Eleven so much, I read it twice and actually enjoyed it more the second time. While re-reading it, I discovered clues I had missed and was amazed at how well-structured the book is. Station Eleven is so tightly constructed, there are few, if any, details which aren’t significant. This has inspired me to include only those details in my books which serve a purpose.

What about you? If you read Station Eleven did you like it? I haven’t watched the miniseries yet, have you? Did you enjoy it? Let me know!

Note: Since starting my book club last month, I’ve made two changes. I now call it “A Writer’s Book Club” and I include a paragraph about how the reviewed book has influenced my writing. I revised January’s book club to reflect these changes. Click here to read the updated version.

Never Let Me Go by Kazuo Ishiguro, winner of the Nobel Prize for Literature. You might be familiar with his most famous book The Remains of the Day. Never Let Me Go is a dystopian novel which takes place in the 1990s in an English boarding school where all is not what it seems. This book was made into a movie in 2010 starring Andrew Garfield and Keira Knightley.