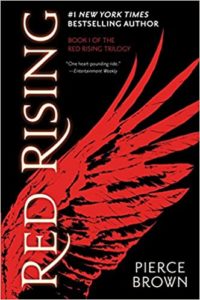 In Red Rising, sixteen-year-old Darrow is a Red helldiver from Mars who, with his people, is terraforming the planet. When he discovers the surface of Mars has been habitable for generations and his people have been deceived, he begins his mission to overthrow the ruling class Golds.

What I liked about Red Rising

I liked the strong characters, particularly the main character Darrow who is reluctantly thrust into his quest. Minor spoiler alert (it happens early in the book): Darrow is selected by the Sons of Ares, a group of rebel Reds, to infiltrate the society of Golds. To achieve this, they genetically transform Darrow into a Gold.

Brown creates seemingly hopeless situations for Darrow and the other characters. But the characters are clever, as are their solutions to their predicaments.

Brown does an incredible job creating the world of this book. You understand how life is on Mars and throughout the solar system. The spacecrafts and technology are clearly described and realistic. The use of Greek names for the majority of characters gives this epic book a mythological feeling.

Additionally, the characters are divided into a hierarchy, Golds being the ruling class, and are genetically engineered. All characters have hair and eye color to match their clan color. Additionally, their bodies match their station. For example, Golds are large with incredible physiques, Reds are smaller and squat to work in the mines, and Obsidians, elite soldiers and bodyguards, are large with varying numbers of fingers.

Side note: I listened to the audiobook version of Red Rising read by best-selling audiobook narrator Tim Gerard Reynolds. Tim’s a master storyteller and uses a Scottish accent which fits in well with the Reds’ tight-knit clans.

Issues I had with Red Rising

Because I listened to the audiobook, it was hard to keep the characters in this large cast straight. My daughter has the hardcover book, but even though it includes a map, it doesn’t include a cast of characters.

Additionally, some of the descriptions were lacking. While I understood what Martian life was like, I had a hard time picturing it. For instance, I’m still not sure how they survived underground. Maybe I would have understood this better if I’d read the book?

Also, there are times when characters suffer near-fatal injuries (parts of this book can get pretty gory), but then their injuries aren’t mentioned again. This editing issue happens more often in subsequent books. 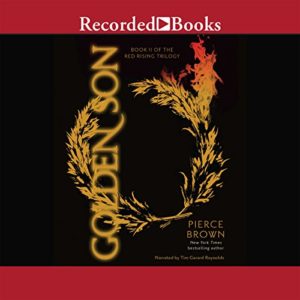 I was so attached to the characters and their quests in Red Rising that as soon as I finished listening to it, I started listening to Golden Son, the second book in the series. Then I went right into the third book, Morning Star.

I recommend reading these books (or listening to them) even though they get a little wordy at times. The way Brown brings the whole saga to a conclusion is incredibly satisfying. There are two more books after Morning Star, but the first three books tell a complete tale.

I’ll make sure I put my characters in The Devil Particle Series into seemingly impossible situations. I’ll also be more specific in my world building so that readers get a clear view of Paul’s world and can more readily experience his journey with him.

One more thing: There’s a Red Rising board game!

We played the Red Rising Board Game once before finishing the book and once after. It was fun both times, but much more fun after listening to all three books.

Maybe I should create The Devil Particle Board Game- how cool would that be?

Next month I’ll review Peter Clines’ novel 14 about a very strange and mysterious Hollywood apartment building. Green, seven-legged cockroaches? Electricity but no wires hooking the building up to the grid? Every apartment has its own unique layout and dimensions? Residents sleep soundly but don’t dream? What’s going on?

I read the book and then was excited to discover the audiobook version is narrated by Ray Porter who narrates Project Hail Mary. I’ve since listened to the audiobook, twice.

What’s happening in June and July:

I sent my editor, Tim Storm, structural outlines of the  entire four-book Devil Particle Series and of the fourth book, The Renegade. As always his comments were insightful and right on point. The best part — I don’t need to make any major changes.

So, on to finishing The Renegade and getting a second or third draft to Tim by mid-July!