In this month’s Writer’s Book Club, I discuss Never Let Me Go by Kazuo Ishiguro, winner of the Nobel Prize for Literature and author of Remains of the Day.

Never Let It Go takes place in England in the late 1990s at a boarding school called Hailsham. The book is told from the point of view of Kathy H. as she recounts her childhood at the school and her teenage years at another institution called “The Cottages”.

The novel centers around Kathy, Tommy, and Ruth and their struggles growing up together in this sequestered environment. There are jealousies, miscommunications, and hurt feelings typical of children. But there is a haunting undercurrent of tension as the reader comes to realize these aren’t typical kids.

The beauty of this book is the way the mystery is slowly revealed, so I’ll do my best not to spoil that for you.There are other things I’ll mention which give some of the plot away. When I do, I’ll preface it with: SPOILER ALERT.

What I liked about Never Let Me Go:

The concept is brilliant; I wish I’d thought of it! I won’t tell you what it is. You’ll just have to read the book.

Additionally, I liked the slow build and the creepy, anxious feeling Never Let Me Go gave me. It’s artfully done. However, while I was curious as to how the book would end, I didn’t have a burning desire to finish, though I eventually did. Maybe the pace is a bit too slow?

The book also captures the relationships between the characters very well, particularly between Kathy and Ruth — how they inadvertently hurt each other, as children often do, then work at redeeming themselves and saving their friendships.

The guardians (teachers) are well drawn and believable in their acceptance of or resistance to the situation. Their different attempts to deal with the children and their struggles with their own morality add to the horror of the novel.

Issues I had with Never Let Me Go:

SPOILER ALERT: I wanted a revolution. I wanted the characters to take a stand. However, their acceptance adds to the unsettling feeling of the book. And by not having the characters rebel, the book gives an interesting twist to the dystopian genre.

SPOILER ALERT: I also waited for the great revelation once the characters understood what was happening. It didn’t come. This is somewhat explained in the book as the characters are raised knowing how they’re special. Still, they were in denial, understandably so, and I wanted to see their reaction once denial gave way to realization and acceptance.

And honestly, the quality of the writing surprised me. I had great expectations because the author is a winner of the Nobel Prize for Literature. But the writing isn’t particularly poetic, the descriptions aren’t beautifully drawn, the pacing is at times too slow. By contrast, I found Station Eleven (last month’s Book Club book) to be more beautifully written and crafted.

I wanted more (which is not necessarily a bad thing):

I’d like a sequel (and I’d read it despite the slower pace).

In 2010, Never Let Me Go was made into a movie starring Carey Mulligan, Keira Knightley, and Andrew Garfield. My daughter and I watched it last night and we loved it (even though it’s not a happy movie). The film closely follows the book and improves upon it by adding hauntingly beautiful music and incredible photography. The acting’s well done, making this horrific story seem all too real. I recommend reading the book first and then watching the movie.

When I write I tend to rush through scenes, eager, I guess, to get to the climax. Kazuo Ishiguro’s Never Let Me Go has taught me that by slowly revealing things I can provoke anxiety in the reader. Slow reveals excite the reader’s imagination and add to the tension. Kazuo Ishiguro is a master at this.

What about you? If you read Never Let Me Go or watched the movie, did you like it? Let me know! 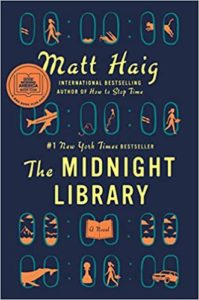 The Midnight Library by Matt Haig, a New York Times bestseller and winner of the Goodreads Choice Award for Fiction. In The Midnight Library, Nora Seed has had incredible opportunities for success but for reasons unknown has rejected them. When she loses her job and her cat, she attempts suicide and ends up in the Midnight Library — the place where all her alternative lives are housed. Which life will she choose?

Where I’ll be this weekend!

Just Write! An Uncommon Writers Conference – March 19th and 20th, 2022. Registration is now open for the Chicago Writers Association’s premier writing conference at the Warwick Allerton Hotel in Chicago. I’ll present “The Benefits of Critiquing” and curate the Let’s Just Read! Live Lit Event. I can’t wait to attend this amazing in-person conference! If you’re attending, let me know and we’ll meet up.