Last Saturday at Madison’s Concourse Hotel during UW-Madison Writers’ Institute, Bill Conner and I pitched our creative non-fiction book Abbey’s Ride for Life – The Bike Ride That Saved 240,000 Lives, Plus 1. 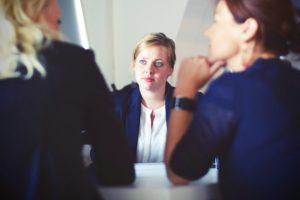 If you’ve ever had a job interview, then you have a small inkling of what it’s like to pitch your book to an agent. There’s the pressure of proving you have what they need and of knowing why you’re a good fit for the job, plus the stress of success —  if you get the job, you’re life will change.

But when you pitch to an agent, you’re also pitching your book — a 300-page story you’re passionate about and have spent years writing, workshopping, editing, and re-writing. And you only have 8 minutes to hook the agent.

I’d pitched both Carpe Diem, Illinois and The Devil Particle to agents before including two of the agents Bill and I would see that day, so I wasn’t nervous. But I was feeling the pressure. This was Bill’s book — if I screwed it up, I’d be letting him down. 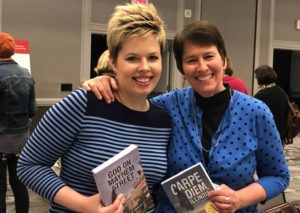 Before Bill arrived, I’d had a full day of helping writers practice their pitches, running the Book Signing and Selling Event, and participating on a panel discussion about marketing. I wasn’t as tired as I thought I’d be, but I was worried how Bill would handle being thrown into this crazy literary world.

I had some time to relax so I bought a Diet Coke at the bar and sat in the comfortable hotel lobby waiting for Bill’s 4:45 p.m. arrival. Within minutes, Bill texted me he’d had a flat, but was hopeful he’d make it in time. Then he texted: “Just kidding” and walked into the hotel lobby. Honestly, that was the best thing he could have done. I knew I didn’t have to worry about him.

We had time, so we headed to the bar. I drank my Diet Coke while Bill ordered whiskey neat and we talked over our strategy. I’d say to the agents:

“I’m Kristin Oakley, this is Bill Conner and we’re collaborating on a creative non-fiction book called Abbey’s Ride for Life – The Bike Ride That Saved 240,000 Lives, Plus 1. Bill’s daughter Abbey drowned in a swimming pool at a Mexican resort after drinking tainted alcohol. Abbey donated her organs and saved the lives of 4 people.

“To honor her, Bill rode his bicycle 2,600 miles from Madison, Wisconsin to Fort Lauderdale, Florida and raised awareness for organ donation – over 60,000 people signed their donor cards as a result. On Father’s Day, Bill listened to Abbey’s heart beat in the chest of her male recipient. The video went viral — resulting in over 300 million views and was translated into 18 languages across 6 continents. Our book tells of Bill’s journey.”

After that, I’d let Bill do all the talking.

Good plan; didn’t work but that didn’t matter. We were asked questions we’d never anticipated but apparently had all the right answers. All three agents (Paul Levine, Steven Salpeter, and Gordon Warnock) asked me to send them the book proposal and Steven mentioned he might call.

We went back to the hotel bar to celebrate. I invited some writer friends to join us as we grabbed a table and ordered drinks. Bill gave me a hug, held me for a moment, and when he let go, there were tears in his eyes.

So now back to work. I’m adding another chapter to the book proposal and revising it. By April 30th, I’ll send chapters to my editor, Tim Storm, and the full book proposal to Laurie Scheer, Director of the Writers’ Institute, who’s agreed to review it. Once I get their comments and tweak it, I’ll send it off to the three agents plus 10-15 more.

For me, this is the scary part. Bill is the one they want, it’s his blockbuster story. I’m an unknown so I’ve got to prove myself. I’m going to give it my best shot.

If you’d like to learn more about our book, check out my last newsletter: My Amazing New Book Project.

Stop by to see me and other local authors next weekend: 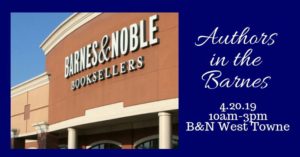