A Writer’s Book Club – Parable of the Sower 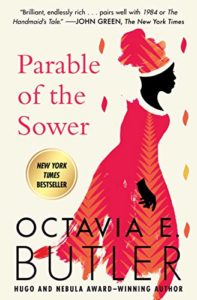 Welcome to my Writer’s Book Club! This month’s selection is the New York Times Bestseller Parable of the Sower by Octavia Butler. Butler was a renowned novelist and, in 1955, she became the first science fiction writer to win the MacArthur Fellowship.

In Parable of the Sower, fifteen-year-old Lauren Olamina lives in a gated California community with her preacher father and her family.

Climate change and economic uncertainties have made living outside the community’s walls dangerous. When a violent mob tears the wall down, Lauren embarks on a quest to start a new life.

What I liked about Parable of the Sower:

Lauren is resilient, strong-willed, and a natural leader. She anticipates the danger, does everything she can to warn her people, and plans for her survival.

In addition to being a strong character, Lauren is interesting and creative. She creates her own religion called “Earthseed” and writes a book titled Earthseed: The Books of the Living. Each chapter in Parable of the Sower begins with a writing from Lauren’s book such as:

All that you touch You Change.

All that you Change Changes you.

The only lasting truth is Change.

Issues I had with Parable of the Sower

Lauren suffers from hyperempathy. She feels other people’s emotions, pain, and suffering. When violence strikes and people are grievously injured or killed, Lauren becomes incapacitated by her hyperempathy. This reminded me of the hyper empathetic character May Boatwright in Sue Monk Kidd’s The Secret Life of Bees.

Hyperempathy is interesting to me and it was one of the reasons I selected this book. I looked forward to reading about it, but I was disappointed. While Lauren dealt with this affliction a few times, it wasn’t enough. Her hyperempathy seemed like an afterthought and didn’t add anything to the story.

Additionally, the violence in the book was overly graphic and unnecessary. And Lauren’s family was uncharacteristically naive considering they lived in such a dangerous world. They didn’t appreciate this danger and were woefully unprepared when disaster struck. I found this to be frustrating and unrealistic. 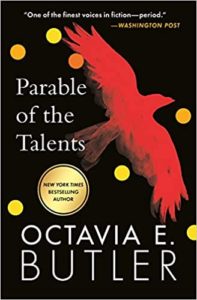 After reading Parable of the Sower, I learned that its sequel, Parable of the Talents, won the Nebula Award for Best Novel. I’ve put it on my to-read list.

I’m looking forward to reading the continuation of Lauren’s story. Maybe her hyperempathy will play a larger part? I’m also eager to discover why this book won this prestigious award.

Like Butler, I enjoy creating characters with unusual philosophies (for instance, John Holden and his unschooling philosophy in Carpe Diem, Illinois). But including philosophies in novels can be difficult because there’s a tendency for the writing to become long-winded or preachy. Butler handles this well by including excerpts of Lauren’s book and by having Lauren discuss her ideas with other characters. I’ll try to emulate some of these techniques.

I’ll also make sure my characters’ flaws and my few violent scenes serve a purpose. And I’ll ensure the violence isn’t gratuitous.

Unfortunately, Octavia Butler passed away in 2006 at the young age of fifty-eight. In the “About the Author” section in Parable of the Sower, Butler is quoted as saying:

“I’m a fifty-three-year-old writer who can remember being a ten-year-old writer who expects someday to be an eighty-year-old writer. I’m also comfortably asocial–a hermit in the middle of Seattle–a pessimist if I’m not careful, a feminist, a black, a former Baptist, an oil-and-water combination of ambition, laziness, insecurity, certainty, and drive.”

Much of this I can relate to, particularly that oil-and-water combination. I certainly hope I’ll still be writing when I’m eighty.

I give Parable of the Sower 👍🏻  👍🏻 👍🏻  for a strong and interesting protagonist.

In Red Rising, sixteen-year-old Darrow is a Red helldiver from the Mars who, with his people, is terraforming the planet to make it habitable for humans. When he discovers the surface of Mars has been habitable for generations and his people have been deceived, he begins his mission to overthrow the ruling class Golds.

What’s happening in May and June:

I’m finishing the first draft of The Renegade — the fourth book in The Devil Particle Series. I’ve written 68,405 words (267 pages). Getting close to the end! I’ll spend the month of June revising this manuscript. I hope to get a polished third or fourth draft to my editor Tim Storm by July 1st.