During the summer of 2007, I listened to Ray Bradbury’s Fahrenheit 451 while I driving around in my car. It made me wonder why novelists tend to create dystopian futures. I thought, why don’t I write a book with a better future, a better society? That’s when I came up with the idea of a small town without schools — a utopia.

In my first draft of Carpe Diem, Illinois, the unschooling town was the main character. Based upon Stars Hollow from the television show “The Gilmore Girls” and Woodstock, Illinois,  my fictional town is quaint, charming, and full of interesting and quirky people who give their children the freedom to determine their own education.

After writing 16 chapters, I workshopped the book at UW-Madison’s Division of Continuing Studies Write-by-the-Lake Retreat. There I discovered the best way to tackle a controversial issue such as unschooling is to create a protagonist who explores the issue along with the reader.

That summer, Dan Brown’s The DaVinci Code was a hit in part because Brown created Robert Langdon to investigate the origins of Christianity. Likewise, I needed a character who would explore unschooling, and so my Chicago reporter, Leo Townsend, was given the job.

In Carpe Diem, Illinois, Leo has one last chance to save his career by writing an article about a town that has no schools. He’s disappointed in this assignment and considers it a fluff piece until he learns of a motorcycle accident on a highway near the town.

The motorcyclist, who is the son of the town’s founder, has driven his motorcycle into a car in the oncoming lane. The woman in the car is married to a state senator who’s trying to outlaw homeschooling in Illinois. Leo decides to investigate.

When Leo first meets Mary Evans, the mayor of Carpe Diem, he askes her to describe unschooling. Here’s the excerpt of their exchange:

The mayor hesitated then adjusted her glasses. “Unschooling is a method of homeschooling that is child-led.”

Child-led? This didn’t gel with Leo’s perception of homeschooling. “I picture homeschool kids sitting at the kitchen table while their mom lectures and hands out assignments and tests. Isn’t that what schooling’s about?”

“Schooling, yes, education, no. School boards and teachers see their role as filling children with information,” Mary said. “They choose what children are going to learn and decide how to present it, generally using textbooks, workbooks, and tests.”

“Unschooling is the opposite of schooling. The children determine what they need to learn, when they will learn it, and how they go about it. Unschoolers learn through real-life experiences. For example, instead of reading about spelunking, they would actually explore a cave.”

“What about a child who decides he doesn’t want to learn something like math?”

“Math is all around us in games, cooking, crafts, music, everywhere. It’s unavoidable. Simply by living, the average child learns the basics. And unschoolers are big believers in self-motivation. Even if the child isn’t interested in exploring math beyond the basics now, someday, inevitably, he will be. It could be a computer program he wants to try and needs to understand algebra first or a treehouse she wants to build and realizes a background in geometry would be helpful.”

But Leo soon discovers everything is not as it seems as they approach the doors of the town hall’s auditorium.

Leo heard a rumble of voices and pictured a large crowd. His heart raced. Stalling, he asked. “How successful is unschooling?”

Mary hesitated, then whispered, “Just between you and me, unschooling isn’t successful. Picture a town where everyone does what they want, whenever they want. Nothing gets done, particularly those things no one wants to do. Math is the least of our worries.” She reached for the auditorium door adding, “It’s a nightmare to govern.”

What? Had she really said that? And if that was true, why would she admit such a thing? If it wasn’t true, why would she say this? Leo started to ask her if he’d heard her right when she pulled on the door. The crowd noise hit him. He forced his feet to move, to follow her into the immense auditorium crammed with people. Stay in the back of the room. It’ll be fine.

Did I mention Leo has a crowd phobia?

Carpe Diem, Illinois has won several awards, including the 2014 Chicago Writers Association Book of the Year for Non-Traditional Fiction. It’s an enjoyable read (without being preachy) for those who are exploring alternatives to public education, including parents, grandparents, and teenagers. And, of course, it’s great for everyone else, too.

And now, for a limited time, I’m offering the Kindle versions of Carpe Diem, Illinois and God on Mayhem Street

You can also get audio and paper editions of both books through Amazon, Barnes & Noble, Audiobooks.com, Libro.fm, and other retail outlets. 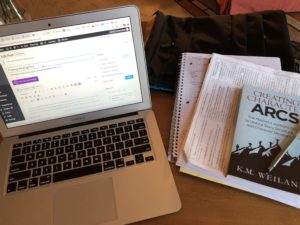 You might like reading my newsletter about my writing life. There are tips on how to manage your time, articles about the craft of writing and writers’ conferences, and so much more. Whether you’re a veteran author, someone who just has an idea for a book, or merely a book lover you’ll enjoy it. Click here to sign up!